Home / Blog / What is a PAYE (Pay-as-you-earn) Umbrella Company?

What is a PAYE (Pay-as-you-earn) Umbrella Company?

The IR35 legislation is used to govern whether a contractor is treated as a ‘deemed employee’ for tax resolutions. A contractor’s IR35 status for every single contract will either be ‘outside IR35’ or ‘inside IR35’ depending on the contract and working provision with each client. If a contractor is ‘inside IR35’ (trapped by IR35) then he/she will be forced to take all earnings as salary only. Hence, using a PAYE umbrella company will be a practical option. However, if a contractor is ‘outside IR35’ (not caught by IR35) then he/she can take benefits of a salary along with dividends by setting up their own limited company – this considerably reduces the tax burden

Relationship between a client, a contractor, and an umbrella company 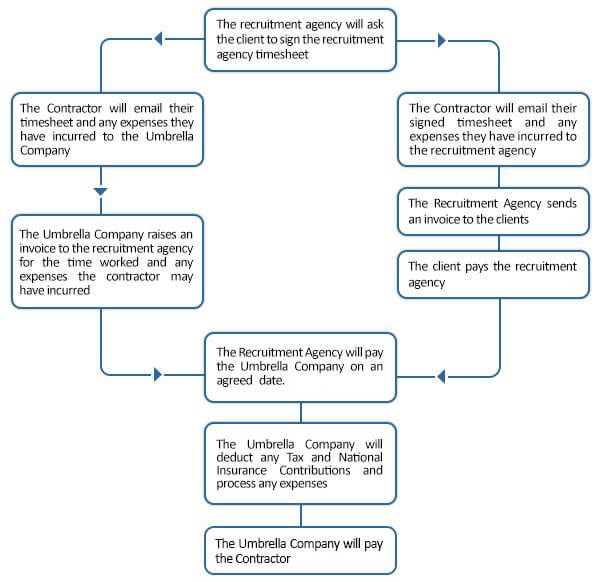 Advantage of working through an umbrella company

Certain individuals who are supervised through umbrella companies and agencies are signing up to provisions which help them save tax. Majority of the employment organisations and umbrella firms function within the tax rules. However, certain umbrella firms and agencies encourage provisions that claim to be ‘tax efficient’ or ‘legitimate’ and offer contractors ways to keep most of their income, thereby, decreasing the tax liability. Such arrangements eventually result in paying extra tax, penalties and interest, and are never HMRC approved

Such provisions can work in numerous different ways, however, umbrella companies following such practices usually claim to help a contractor by letting them keep an increased portion of the income and reducing the paperwork. Such umbrella companies state that the payment is non-taxable as it isn’t considered as an income, rather a credit, loan, credit, or somewhat alike. But it must be noted that such payments are essentially no different to standard income, and it’s imperative to pay National insurance (NI) contribution and applicable tax. Below mentioned is an example that explains how such payments are made:

How to escape this

In order to avoid falling in such a trap, a contractor must check the below mentioned points:

Usually, contractors are told that the arrangement is HMRC complaint, however, it turns out to be incorrect. The above mentioned arrangements can be extremely risky and HMRC always continues to defy tax avoidance arrangements. If a contractor is involved in such an arrangement, then, he/she is likely to be evading tax and possibly could result in giving extra tax, interest, and NI contributions, and additional penalties

What is the Cost of Dementia Tax?

What are the Benefits of Removing Tampon Tax?

Are you looking to Buy Vintage Shelf company UK?