What is Charity Commission

The Charity Commission for England and Wales is the regulator and registrar of charities and philanthropies in England and Wales. The Commission is a self-governing government department which is answerable to parliament. The Commission is also accountable for the implementation of its quasi-judicial powers to the High Court and First-tier Tribunal (Charity). It is responsible for making a decision with regards to organisations being termed as ‘charitable’ and whether it should be added or removed from the Register of charities. The Commission operates a clear officially authorised framework and works in-line with the published procedures and policies and procedures to make certain that it is impartial in its approach. As of 31 March 2016, there were total of 165,334 charities (in addition to 6,455 subsidiaries) and the Charity Commission regulated £70.93 billion charity income in FY2016.

As new charities registrar and regulator, the Charity Commission carries out quasi-judicial functions subsequent to the common law which govern charities. The Commission adopts an exact approach in exercising its powers, act proportionately and also provides reasons for its decisions. In case a law is dated, uncertain or vague, the Commission approaches the case in a similar manner as they think the courts would. The decisions of the Charity Commission can be appealed to the First-tier Tribunal (Charity) and also some of its decisions can be openly challenged in the HighCourt.

The Charity Commission for England & Wales Aims to Focus on Four Strategic Priorities:

Task Performed by a Charity Commission in England and Wales

Registering a Charity: Take a decision on whether a charity meets the legal test for charitable status

The Charity Commission formally assesses all applications for registration on a scenario-by-scenario basis using its Risk framework. The Commission aims to protect faith and poise in a charity by restricting the registration of only those organisations that appropriately clear the legal tests. It has strengthened its approach of assessing whether applicants are indisputably charitable. The new approach is more rigorous and it is also making the process more streamlined to identify which organisations might raise governance or compliance concerns, though being charitable

Maintaining a Register of Charities

The Charity Commission in England & Wales aims to make certain that the Register of charities is correct and up-to-date.Its data is also used by many other charities and research organisations, and public bodies to derive analysis about the charity sector in England and Wales. For reasons of responsibility and simplicity, the Commission requires charities to provide key public information, at the appropriate time. Users can search for registered charities on the online portal and with their key information. It also highlights on the charities Register, the charities which fail to act in accordance with basic information requirements - these include filing annual returns and accounts on time, charities with qualified accounts, and charities that are subject to a legal investigation.

Give Permissions and Consents

Sometimes it so happens that charities need permission to perform certain tasks such as disposing their property, making payment to the trustees, authorising large transactions in regards to land. The Commission has initiated work to make it more streamlined to get low risk permissions.For any significant changes, the trustees should consult with stakeholders or discuss with their advisor such as DNS Accountants before approaching the Charity Commission

Monitoring Charities in England and Wales

Monitoring includes proactively working towards anticipated problems. Tasks may include desk-based research, interacting with or conducting interview with trustees, visiting the charity's premise and examining its books and records. This may result in providing the charities with regulatory recommendations, thereby ensuring that the advice is followed and an action plan is set-up

Charity reporting and accounting: the essentials

There are different needs for different types of charity depending on their size and structure. To comprehend what applies to a charity, below mentioned are a few check-points:


It is imperative to make certain that the charity’s trustees understand:

Types of charity accounts in England and Wales

A charity has the option to prepare either accruals accounts or receipts &payments accounts. The type of charity account will depend on the income of the charity and whether it has been established as a charitable company or not

Charities with gross income above £250,000 during the financial year can use this method. All charitable companies have to prepare accruals accounts that act in accordance with the applicable Statement of Recommended Practice (SORP). The SORP to be considered will depend upon the charity’s financial year. Accruals accounts contain a balance sheet, a detailed declaration (statement) of financial activities, and explanatory notes. These accounts are necessary in accountancy terms to show an ‘accurate and fair view’

This is the easiest of the both the methods of accounts preparation. This method is used when a charity has a gross income of £250,000 or less during a financial year. Receipts and payments accounts contain a declaration summarising all the amount received and paid out by the charity in a financial year, and a declarationproviding details of its assets and liabilities at the end of a financial year

For charities registered in England or Wales, it is a must to send their annual returns. This annual return is different from charity tax return.

On charity commission website, now you can find information about registered charities in England and Wales such as:

It is important to keep all your charity details up-to-date. In case of any changes to details, it is possible to update details online with the Charity Commission.

These changes might also be required to be reportedto HMRC and possibly Companies House.

Changes You Must Report

You must wait 30 days after you’ve told HMRC about a change before making a claim, for example for Gift Aid.

You must report changes to your charity’s:

You can use the charity commission website service to change:

Informing Charity Commission about Changes in Your Details:

If your charity is a company

You must report changes to your charitable company's name to:

You can contact the Charity Commission if you have a problem using the service.

Informing HMRC about Changes in Your Details:

Tell HMRC about any change to your charity by completing form ‘ChV1 – HMRC Charities change of details’.

Setting up a charity: How to setup a Charity in UK

Want to set up a charity in UK? You need to follow 6 steps in order to setting up a charity.

Closing a Charity in England & Wales

There can be numerous reasons behind shutting down a charity, such as:

Legal requirement: If you are closing your charity, there are regulations as per which you must inform the Charity Commission, and the charity commission must remove it from the register of charities.

Having trouble logging into charity commission website? Forgot a password or need to get a new one? Now, continue your charity's annual return or registration application, our guide will help youget a new or replacement password.

Log in to start or continue your annual return 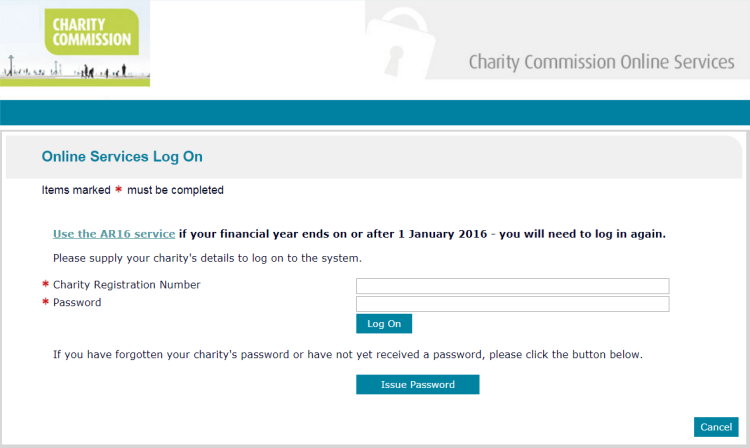 Log in to continue an application to register a charity

Select 'Continue an application to register a charity' when prompted.

Helpline (available 10am to midday and 1pm to 3pm, Monday to Friday)

Make complain about a charity

Problems getting a National Insurance number

How to work out and claim relief from Corporation Tax trading losses?

How can HMRC find out about my rental income?

Vidit Agarwal, Marketing Director of DNS Accountants, award winning accountancy firm in London. He comes with a great experience and expertise in IT and Marketing related activities.

Thank you for your feedback.
Oops! An error occured!.
Sign up to our newsletter